THESE TABLES WON'T BE AVAILABLE DURING THE 2013 SEASON DUE TO TIME PRESSURES. THE FINAL 2013 TABLES WILL BE PUBLISHED AT THE END OF THE SEASON. THEY WILL RETURN IN 2014, MEANWHILE THE 2012 AND 2011 TABLES ARE STILL AVAILABLE.

FINAL TABLES the match Edinburgh Vs. Workington was not staged.

FINAL TABLES the matches Rye House Vs. Sheffield and Sheffield Vs. Ipswich were not staged. 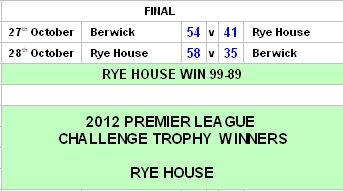 'MiniMax' indicates that you can see the crucial information within your eyeline at an instant glance. Additionally, more detailed information/stats follow the first couple of columns of which you can peruse at leisure.

The league tables as i publish them in their default mode will be ordered by the traditional points gained columns. However, once i've found time to set them up, one will be able to click on any parameter to view the table at will.

Pct, which equals percentage of available points gained, is a telling stat in view of the way speedway awards league points nowadays. For example if a team wins all of it's home matches by 7 points or more it will have a 100% record. If a team wins all the matches by only 1-6 points it would actually have a true average of 67%.

Therefore, displaying the percentage figure gives a far more accurate output than both teams being listed at 18 wins, 0 draws and 0 losses which is what a lot of tables show. When comparing teams records it also saves one from having to engage in mental arithmetic adding up the varying points for margins of victory. A simple glance at the percentage shows which team is performing better.

I don't include an 'overall' percentage of points gained category as this would be subject to the same damaging season long wide variance of matches ridden factor that affects traditional tables. However, as a home and away category it is a very informative stat. Incidentally, looking at the tables as they stand at the time of writing, in the Elite League Swindon have gained an impressive 54% of away points available. In stark contrast Ipswich a shocking mere 2%! An example of a home team is Newcastle in the Premier with 95% at home and only 9% gained away.

Rather than display the total race points earned i show the average per meeting AND rounded up to whole figures, such as Swindon's record today, at home 55-38 and away 46-45. That's far easier to grasp than the usually published four figure numbers and made worse by a wide variance of matches ridden by teams. All of which makes the traditonal table layout not much use until the final table of the season. Even then, it is clearly preferable and comprehendable to have it in the form of a match average that one can make more sense of. I strongly proposed this in various speedway forums and suggested it to websites and publications years ago.

As with most sports tables nowadays - in view of the numerous categories needing to be included - it's more instantly informative to have matches ridden and points gained as the first two columns. After all, they are the two key fields that matter with the others just being additional information. If you picture the Premier table as the season progresses you'd need to switch your eyeballs to a widescreen mode to make for easy and instant comprehension. This alteration i make to the traditional sports table means that the vital information is available at a glance.

It's not just speedway that suffers from the current information overload layout. One can check out the football league tables in the broadsheets, a wealth of information but far from easy on the eye when looking at matches played and points earned. It's the same with all comprehensive tables published be it on the web or printed ones in the press.

Once i get the time i can design one that allows you to click on any category heading and instantly sort the table according to your selected parameter. Apart from the current standard points you might like to view tables by home/away percentage of points earned or race points scored. If i was a promoter looking for entertainment i would dread certain teams visiting with the resultant drop in attendances. It isn't always the teams at the bottom of the table either. Certain sides have a veritable fortress at home which seems to please enough fans to make it pay, however, on their travels they are no attraction at all.

One of the problems with speedway is that there is often a wide imbalance in the number of matches ridden. Additionally, this is exacerbated by another large variance of home and away matches being far from even.

I designed a 'projected points' feature amongst various automatic calculations within my spreadsheet tables . It tends to be very accurate as to the real state of play. It simply takes the home and away results over the course of the season so far and calculates the total of points over the full quota of matches in a season. Example points using the table as it stands at the time of writing this; in comparison to Edinburgh, Rye House (accurately) drop a fair bit in the table due to not only have ridden three more home matches, but the fact that their away form all season is poor and their home being a bit of a fortress. Edinburgh have achieved 17% of away points available so far whilst Rye House only 7%. Only Stoke and Scunthorpe have a worse away record. Using the 'projected points' total, Edinburgh who are currently way down in 11th spot are really at the standard of a play-off place and Rye House are flattering to deceive (these will obviously change if a team's form changes greatly)

You may think that one can look at a table and say that a team which has ridden far less matches let's you know that they are of higher standard than their position implies. However, using the projected points calculation on the home and away performance gives a more accurate representation. I mean if a team has 7 matches in hand their likely end of season total will be enormously different depending on them being seven home or seven away fixtures to take place.

An example comparing the 'Projected Points' system to the traditional table and also to the sometimes used plus/minus system. For illustrative purposes i've made the records identical and simplistic save for the imbalance of matches (away ones in this case) which is where the projected points comes into it's own.

The projected points system extrapolates the actual results so far and applies them to an even yardstick of eventual matches to be ridden. Because the 'plus/minus' system does not extrapolate the home and away matches into a season total of an 'even' number of matches, it will quite often be misleading.

This isn't a predictive system based on personal judgements. It is how they actually stand as and when you view it. It extrapolates all the results so far and presents them on to an even number of matches ridden. It's an 'as now' view and not predicting the end of season points. However, as mentioned earlier it is remarkably accurate in displaying the true standings of the teams and their eventual likely finishing positions.

If you should spot any errors in the tables please email me (reverse this address - just avoiding bots trawling the web) net.manchesterpaul@speedway
Please note i am NOT a member of any social networking sites such as Facebook etc.